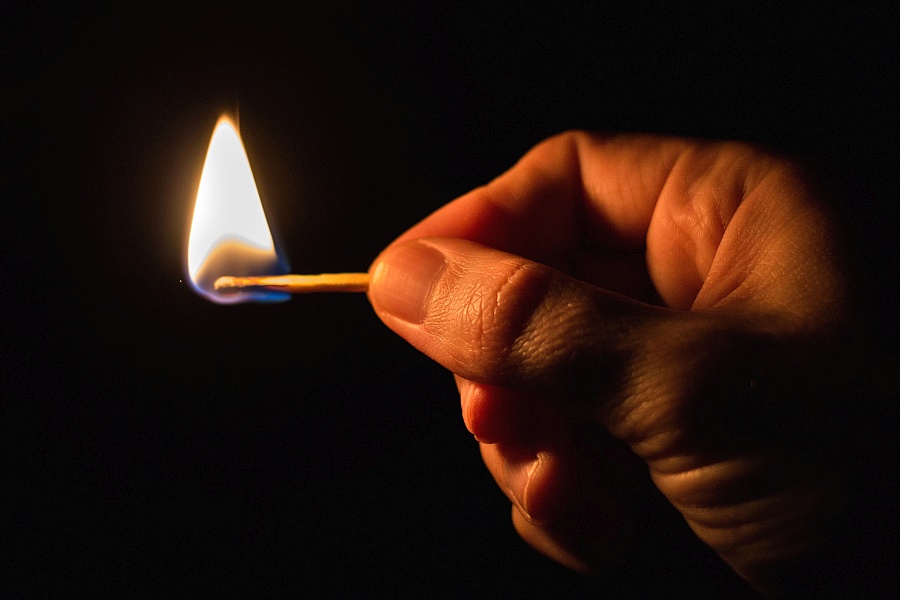 Fire isn’t hot. And water isn’t wet. I know this to be a fact because someone told me.

Today I got burned quite badly. At least I think I might have. It really hurt. I think. I’m not sure. I’m so confused!! Fire isn’t supposed to hurt. That’s what I was told. But my hand hurts. I think. I don’t know what to do. Should put my hand in water, or back in the fire? I’m not sure.

What am I supposed to do? I can’t live like this.

OK, maybe I’m exaggerating just a little bit. Or am I? If you’ll permit me, I’ll tell you a couple of very true stories instead and let you make up your mind.

When I was a teenager, I told my parents, “I want a motorbike.”

When I was much younger I had said, “I don’t like beans. I’m going to be sick if I eat them.” I was made to eat them anyway. And a second helping, too, because I was complaining and being obstinate.

The last time I had refused to eat them, a hand had grabbed the back of my neck and my face was shoved down into the plate and rubbed in it. I got beans up my nose, down in my windpipe, all over my face and shirt, and all through my hair. Still coughing, choking, and sputtering, I was taken to the tub and hosed down with the shower. So this time I decided I’d better just try and eat them.

And then I threw them back up. I was punished. I tried to say I was sorry. I was told, “You’re not really sorry. If you were really sorry, you wouldn’t have done it.”

These first two examples were not isolated experiences in my life. Neither were they uncommon. They were my regular, every day normal. By the time I was in my teens, I was so angry and depressed I would secretly cut myself, starve myself, refuse to allow myself to drink, tempt fate and taunt death, and fantasize about committing suicide. Ironically, I didn’t know that’s what I was doing at the time; probably because nobody told me. At the time, all I knew–or thought I knew–was that I couldn’t stand life anymore.

Do you notice the theme here? Do you see what was constantly happening? Other people were constantly erasing my reality, and demanding that I deny and reject my own experience and instead adopt their version of their reality which was flimsily based upon their whims, fantasies, and opinions. Everyone wanted me to deny my own experience, and to blindly accept whatever it was they would tell me. And everyone was telling me different things. At least I think they were. Or was that all in my head, too?

I now refer to this violent manner of speaking as ‘God-speak’ because it “allows us to play God using [an] omniscient ‘Deity mode’ of speech” in which opinion is confused with fact, and this allows “even the most ignorant to transform their opinions magically into god-like pronouncements on the nature of things.” (Kellogg and Bourland, “Working With E-Prime”) Moreover, it allows us to judge and condemn others, and even justifies any mistreatment and hatred of them.

Years later, when I was told “No, you don’t want a motorbike,” I just accepted it to be true. I didn’t question what I was told. I couldn’t. I wouldn’t have known how to question it even if I’d wanted to. I thought, “Apparently I’m so damaged, so confused, so evil, so pathetic and stupid, I don’t even know what I think or want. Everyone else knows more about me than I do. I certainly cannot trust my own thoughts and feelings.”

To make matters worse, my parents were members of the Jehovah’s Witnesses organization, and so God-speak was not just common, but also highly esteemed, encouraged, mandatory. Only those with some position of status, some officially recognized job title like elder, member of the Governing Body, or parent, are licensed to have an opinion and thus authorized to use “God-speak.” Once you earn your license to use God-speak, it becomes your job to make sure that no one else is allowed to be sure of what they know, nor allowed to have or use a God-speak license of their own.

Fast forward a few more years. I’m now a completely dysfunctional wreck. My wife could see how badly I was hurting, and how depressed and confused I was. Once, when she asked me, “Would you like a hug?” I collapsed and started crying uncontrollably. I didn’t know what the right answer to her question was, and I didn’t know how to find out, nor who to ask. Who could know? I sure couldn’t.

In the Jehovah’s Witness organization, I was told that if I loved God, and if I prayed, I would get relief from all this confusion and hurting. I prayed. But I never got relief. Then I was told that if I wasn’t getting relief, it was because I didn’t really love God and therefore didn’t deserve it. But I did love God. Didn’t I? Well, I thought I did–until I was told I didn’t. Now how could I know? How could I find out? Who could I ask? I don’t know.

So I prayed more. At least I think I did. But what do I know? Maybe I did. Maybe I only thought I did. Who knows? Not me.

And I studied more. At least I think I did. But how would I know? Maybe I did. Maybe I didn’t. Who knows? Not me.

I also tried to simultaneously meditate lots more and to not meditate too much. How much is too much? Who knows? I don’t know. Or do I? Do you know? Can you tell me? And can I trust myself to hear the answer accurately?

I tried to have faith. I tried to believe. Believe in what though? I already couldn’t trust my own thoughts. And now some had started to tell me that it was probably because I had some sort of a mental illness.

I did not yet know that mental illness takes two persons: One to judge and pathologize, and the other to accept the first person’s judgment. I’ve since learned the truthfulness of that, but at the time, I simply accepted the judgments and believed that my defective thinking ability was the problem.

So off I went to seek professional help.

To be diagnosed with a mental illness is probably the ultimate example of suffering as a result of ‘God-speak.’ The well-intentioned therapist or pyschiatrist often tells you that you have chemical imbalance. That’s just a fancy way of gift-wrapping an opinion and selling you on a lifetime’s supply of a prescription drug. You are being told that there’s nothing wrong with the world. Instead, everything that’s wrong is inside you. Not once did any psychiatrist ever ask me, “Hey, what really happened to you.” They only looked at my depression or anger or OCD and disapproved of how I was reacting to all the crazy-making that I was living in. No one cared about what had happened to me, nor what was now being done to me. They just looked at me and wanted to make my symptoms go away. No one wanted to acknowledge their role as part of my problem.

I eventually came into contact with a most wonderful psychologist. For the first time in my life, someone listened to me. Someone heard me. Someone didn’t try to tell me anything I didn’t already know. Someone wasn’t trying to dictate to me what they thought my reality should be. It took many hundreds of hours of “therapy” to help me learn how to look inside myself, how to find and learn how to hear the real me.

Prior to that, everyone in my family, all my friends, all the people in the Jehovah’s Witnesses organization, all the doctors (except the one who really saw me), they all saw only what they wanted to see. No one saw the real me. No one believed me.

And that’s the most tragic part of it all. Somewhere along the way, I’d forgotten how to look inside myself, and how to know if I knew something. As a baby, I instinctively knew when I was tired, hungry, thirsty, lonely, scared, or in pain. Now, I had to look to someone else to tell me. How did this happen?

Wait! Don’t tell me. I’m beginning to suspect that it’s all this telling that goes on constantly that’s a major source of the problem.

I’d like to quote a few words written by Barry Stevens in her book “Person to Person: The Problem of Being Human.”

“In the beginning, I was one person, knowing nothing but my own experience.

“Then I was told things, and I became two people: the little girl who said how terrible it was that the boys had a fire going in the lot next door where they were roasting apples (which was what the women said) — and the little girl who, when the boys were called by their mothers to go to the store, ran out and tended the fire and the apples because she loved doing it.

“So then there were two of I.

“In the beginning was I, and I was good.

“Then came in other I. Outside authority. This was confusing. And then other I became very confused because there were so many different outside authorities.”

So now, if I ask you whether or not you like ice cream, where will you go to find out the answer? Will you go and ask someone else?

Whatever you do, don’t ask me. I don’t know. But on second thought, please, don’t take my word for it.

How Can Healing Yourself Help You Forgive Someone (After Experiencing Abuse or Trauma)?

How Can Healing Yourself Help You Forgive Someone (After Experiencing Abuse or Trauma)? The simplest answer: https://askjacqueline.life/how-can-healing-yourself-help-you-forgive-someone-after-experiencing-abuse-or-trauma/    …

Can You Really Control Your Emotions? by Greg Williamson

Can You Really Control Your Emotions? To demand that a person control their emotions1 or to feel different feelings than…

How To Rewire Your Minds-

Can You Really Control Your Emotions? by Greg Williamson

Can You Really Control Your Emotions? To demand that a person control their emotions1 or to feel different feelings than…