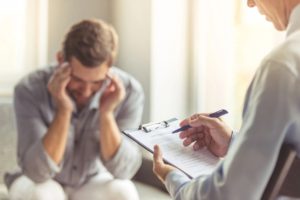 Many of us are familiar with the term “PTSD” or post-traumatic stress disorder and may have come to associate the disorder with veterans returning home for war. Post-traumatic stress disorder is a mental health condition that is caused by experiencing or witnessing a traumatic or terrifying event. Post-Traumatic Stress Disorder is not limited to a specific age or gender, culture or socioeconomic background.

Many of us are familiar with the term “PTSD” or Post-traumatic stress disorder and may have come to associate the disorder with veterans returning home from war. We may have seen movies or watched a news broadcast about soldiers who are portrayed as angry, depressed, suicidal or otherwise unable to function. While not everyone who has served in the military develops PTSD, studies have found connections between combat stress and higher risks for developing PTSD. In one study, out of 103,788 veterans who returned from tours in Iraq and Afghanistan, 25% were diagnosed with psychological disorders including PTSD. (Myers, & DeWall, 2017) (Seal et al., 2007).

While PTSD can evoke many strong feelings for those affected, as well as individuals connected, there are many myths and misconceptions about the disorder. So, what is PTSD? Post-Traumatic Stress Disorder (PTSD) is anxiety related mental health disorder that is related to a traumatic event(s) (American Psychiatric Association, 2013). These events can include experiencing or witnessing bodily harm, a life-threatening event, a sexual assault, a car accident, military combat, or surviving a natural disaster (American Psychiatric Association, 2013). Post-Traumatic Stress Disorder is not the result of cowardice, overreaction, or mental weakness. According to Myers, & DeWall, (2017) half of us may endure a traumatic event at some point in our lives.

While this does not mean that developing PTSD is an inevitability, 5-10% of individuals who do suffer a traumatic event do develop PTSD (Myers, & DeWall, 2017). Out of this 5-10 % of individuals that develop PTSD, 1 in 10 will be female and 1/20 will be male (Myers, & DeWall, 2017). Given the fact that so many individuals will experience at least one traumatic event within their lifetime, how do we know when someone has developed PTSD? How do we differentiate PTSD from other disorders like depression? According to the DSM-V a diagnostic criteria manual, PTSD is diagnosed through a specific set of symptoms organized into categories, in order to correctly identify and differentiate PTSD from other psychological disorders (American Psychiatric Association, 2013).  Individuals who suffer from PTSD can experience avoidance of thoughts related to the event, negative changes in cognition and mood, isolation, poor decision making, suicidal thoughts, hypervigilance, difficulty sleeping, nightmares, memory lapses, and blame of self-and/or others (American Psychiatric Association, 2013). In order to receive a diagnosis of PTSD, an individual must have experienced at least one stressor such as sexual assault or surviving a natural disaster (American Psychiatric Association, 2013).

Reactivity and arousal can include exaggerated startle reflex, becoming hypervigilant by being alert despite not being in any immediate danger. Reactivity and arousal can also cause an individual to become poorly regulated in terms of decision making, and self-control (Gray, Bolton, & Litz, 2004). This can cause an individual to make poor decisions or engage in dangerous and/or risky behavior. Diagnosis of PTSD also requires that symptoms identified must have lasted for more than a month and cause significant impairment in social and employment functioning (American Psychiatric Association, 2013). Before finalizing a diagnosing PTSD, all of the symptoms must be present, and for a specific duration (American Psychiatric Association, 2013). A diagnosis must also exclude symptoms of substance abuse, and symptoms of physical or psychological illness in order to avoid misdiagnosis.

PTSD can cause also cause a verity of changes in both the body and the brain itself. These changes can affect the way a suffer thinks, feels, and behaves. In a series of fMRI imaging studies (examining the brains of individuals with PTSD), researchers Hughes and Shin (2011) found differences in the amygdala, medial prefrontal cortex, hippocampus, and insular areas of the brain. PTSD has also been implicated in differences in the production of the stress hormone cortisol when compared to individuals that do not suffer from PTSD (Meewisse et al., 2007). Some of the challenges associated with diagnosing PTSD is that the onset of symptoms, duration and intensity can vary from person to person (Gray et al, 2016). Symptoms of PTSD can affect men women and children of multiple age ranges, cultures, and racial backgrounds (Myers, & DeWall, 2017).

Symptoms of PTSD can manifest immediately within the first initial months. In other cases, symptoms may not manifest for years) following exposure to trauma. (Gray et al, 2016). In other words, depending on the individual, symptoms of PTSD can last months, years or in some cases last indefinitely (Lancaster et al, 2016). It is also important to mention that the development of PTSD can also be influenced by cultural differences. In one study conducted in South Florida following the hurricane Andrew disaster, 15% of Caucasians, 38% of Latinos, and 23% of Blacks polled developed PTSD (Perilla, Norris, & Lavizzo, 2002). This study’s findings illustrated that the “adaptive nature of the behaviors due to political, social, economic, and historical perspectives” influenced the development of PTSD (Perilla, Norris, & Lavizzo, 2002). These factors of duration and intensity can also be influenced by intervention and quality of treatment.

Although PTSD can be highly challenging to cope with, there is considerable evidence that using appropriate psychotherapies and psychopharmacology are effective in treating and managing this disorder. One of the drug therapies used in treating PTSD is from a drug classification known as selective serotonin reuptake inhibitors (SSRIs). Drugs from this class can include Sertraline, Citalopram, escitalopram, fluoxetine, and paroxetine. SSRIs are effective because they block the reabsorption of serotonin in cells in the brain which leaves serotonin available longer in the brain (Ipser, & Stein, 2012).

Serotonin is an important neurotransmitter responsible for helping to regulate mood, sleep, behavior, sexual desire, and hunger. In one study focusing on treating veterans with PTSD, SSRI drugs were shown to have a 60% response rate, and a 20-30% rate of remission (Alexander, 2012).

In addition to available drug therapies, Cognitive behavioral therapy (CBT) as an evidence-based therapy has been shown in randomized trials (in patients who received individual trauma-based CBT therapy) to improve symptoms in 92% of participants (Kar, 2011). Cognitive behavioral therapy is a type of talk therapy that helps patients understand how a person’s thoughts and beliefs, can influence how they may think and behave (Kar, 2011). CBT when conducted by a licensed therapist, can help individuals with PTSD to recognize and replace unhelpful behaviors with adaptive behaviors, develop coping strategies, and to identify and challenge certain automatic thoughts (Kar, 2011).

Despite the challenges that PTSD poses for both individuals and the communities they live in, PTSD is a condition that can be successfully managed, and sufferers have legitimate reasons to hope for improvement. This is thanks in part to the consistent efforts on the part of therapists, law-makers, clinicians, the medical community, researchers, and public and private concerns to seek improvement in understanding the condition (Weng et al., 2015). This collective involvement has and will continue to lead to the development of improved evidence-based therapies, greater public understanding, and improved access to resources to better assist in managing this pervasive mental health condition.

This entry was posted in PTSD, Uncategorized. Bookmark the permalink.