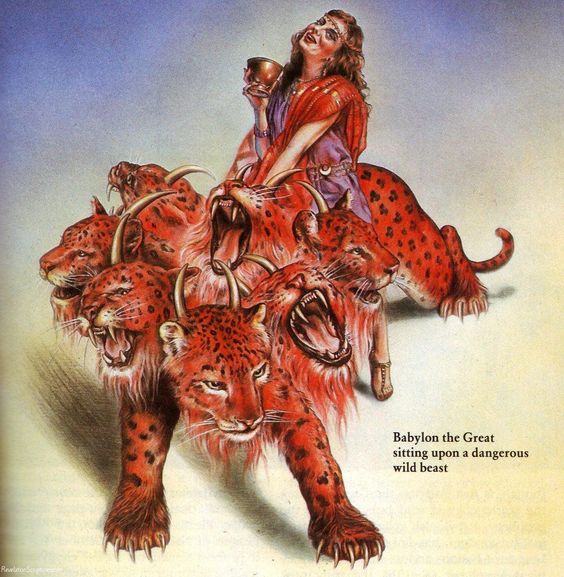 This woman that sits on the beast has been a Mystery for so long, but now Revelation is coming alive with the help of Holy Spirit.

She is addressed in two places actually and a closer look seems to show she isn’t just religion as I see it but seems to be more.

I see “The  World system. The Merchants are doing as they are now during the Covid-19 Crisis, lamenting that there is no one buying their goods and services. Why?

Today it is because Covid-19 will not let us open businesses again, without a shutdown. People can’t go out and shop.

This is the economy being affected. Not just religion being the reason for the shutdown but it is shut down also.

Another aspect mentions the religious aspect of this woman especially because many religions have killed and persecuted Christians.

Today Muslim (religious) nations are beheading Christians. In the past, the Catholic church literally wore out the Saints with their mass slaughter of Christians.

These are my thoughts, what do you see?

Babylon, the Prostitute on the Beast

17 One of the seven angels who had the seven bowls came and said to me, “Come, I will show you the punishment of the great prostitute, who sits by many waters. 2 With her the kings of the earth committed adultery, and the inhabitants of the earth were intoxicated with the wine of her adulteries.”

3 Then the angel carried me away in the Spirit into a wilderness. There I saw a woman sitting on a scarlet beast that was covered with blasphemous names and had seven heads and ten horns. 4 The woman was dressed in purple and scarlet, and was glittering with gold, precious stones and pearls. She held a golden cup in her hand, filled with abominable things and the filth of her adulteries. 5 The name written on her forehead was a mystery:

the mother of prostitutes

and of the abominations of the earth.

6 I saw that the woman was drunk with the blood of God’s holy people, the blood of those who bore testimony to Jesus.

18 After this I saw another angel coming down from heaven. He had great authority, and the earth was illuminated by his splendor. 2 With a mighty voice he shouted:

6 Responses to THE WOMAN RIDES THE BEAST!

This woman that sits on the beast has been a Mystery for so long, but now Revelation is coming…